You can catch Cold War Kids at House of Blues in Cleveland, showing Jun 30, 2020 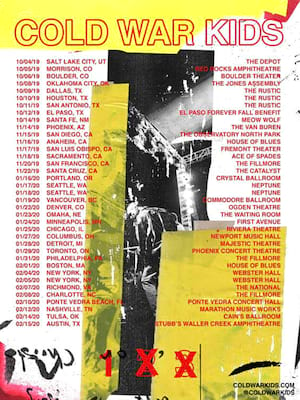 Alternative rockers and indie darlings Cold War Kids head out on a new tour in 2020, in support of their newest studio album, New Age Norms. Known for their jangling guitar riffs and heartfelt lyrics, CWK cite influences are far-ranging as Fiona Apple to Led Zepplin, which all comes together in a blues-rock infused jam fest.

Formed in 2004 in Fullerton, the five-piece now call Long Beach, CA their home. First rising to prominence on the release of debut studio album Robbers & Cowards which included 'Hang Me Up To Dry' and 'We Used To Vacation'. Since then they've toured extensively and charted on the US Billboard Alternative chart with 'First'. Don't miss a night with these super cool 'kids.

Sound good to you? Share this page on social media and let your friends know about Cold War Kids at Birch North Park Theatre.