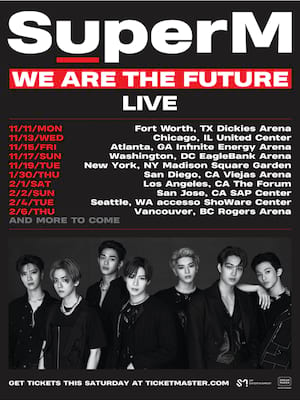 The K-Pop supergroup to end all K-Pop supergroups, SuperM is comprised of members from popular K-Pop boy bands SHINee, ECO, NCT127 and WayV. Formed in the summer of 2019, the seven-member outfit only released their debut self-titled EP in October 2019, but are already prepped and primed for world domination. Don't miss the We Are The Future live concert series AKA first ever tour of North America this fall!

Described as 'the Avengers of K-Pop', SuperM was carefully crafted by South Korea's largest entertainment company SM Entertainment. Already taking America by storm, their EP landed right at No. 1 on the Billboard 200 albums chart, making history for earning the largest debut sales by a K-Pop act. Don't miss the breakout group as they rise to stratospheric heights!

Seen SuperM? Loved it? Hated it?

Sound good to you? Share this page on social media and let your friends know about SuperM at Viejas Arena.