Sorry! You missed The Screwtape Letters at Balboa Theater 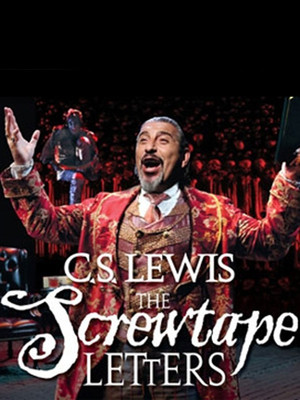 "Wickedly witty... one hell of a Good Show!! Lewis' topsy-turvy exercises in inverted moral theology were made to be played with lip-smacking relish!"

Why See The Screwtape Letters?

HIS SUPREME EVILNESS WILL SEE YOU NOW....

Having toured the country repeatedly, this wickedly funny and whip smart theatrical adaptation of C.S. Lewis novel's about the intricacies of spiritual warfare between The Enemy (God) and Our Father below" (Satan), with humans blissfully unaware between the two planes.

The play follows the clever scheming of a high-level demon who spends eternity enticing humans toward damnation. After all, human souls are the very source of food he needs to survive. In this inverted moral universe set in a sinister, yet stylish psychiatry office in hell, Screwtape dictates a letter to his unseen nephew Wormwood, despairingly trying to educate him on the fallacies of human nature. His protege Toadpipe transforms into the icons of vice at flick of Screwtape's fingers in a hope to illustrate to both the audience and the hapless Wormwood what it means to be a demon.

As His Abysmal Sublimity Screwtape, Max McLean creates a "master of the universe" character, one not unlike Michael Douglas' cunning Wall Streeter, whose infinite knowledge is underlined by a world-weary cynicism of human nature and anger at his nephew's naivety.

The Screwtape Letters is suitable for audiences aged 12 and upwards.

90 minutes with no intermission

Jay: “There is a spiritual dimension to this life we can't see.”

I saw this in NYC the narrative was compelling and the stage presence and... more

Sound good to you? Share this page on social media and let your friends know about The Screwtape Letters at Balboa Theater.