Sorry! You missed Lord Huron at Humphreys Concerts by the Beach

You can catch Lord Huron at Red Rocks Amphitheatre in Morrison, showing Jun 2 - 3, 2021

Lord Huron is also touring to: 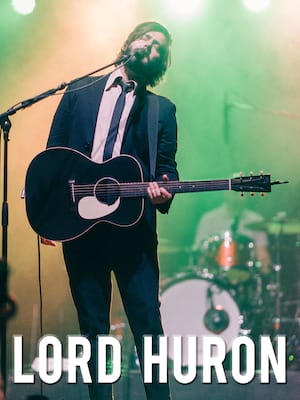 What sets the project apart is the level of their craft and the feeling of travel and discovery in the lyrics and sound.

Folk-adjacent indie rock pioneers Lord Huron have made a name for themselves conjuring the mysticism of the American wilderness with eerie, echoing acoustic guitars, haunting vocal harmonies and philosophical lyrics. Don't mist their wistful melodies and reverb-laden Americana-tinged anthems as they hit the road on their latest tour!

Founded in 2010 by frontman Ben Schneider the band takes its name from Lake Huron in Michigan where Schneider spent a lot of time as a child. Over the course of the band's career, they have enjoyed great success in the charts with their 2015 and 2018 albums, "Strange Trails" and "Vide Noir", both hitting the number one spot in the folk charts!

Sound good to you? Share this page on social media and let your friends know about Lord Huron at Humphreys Concerts by the Beach.