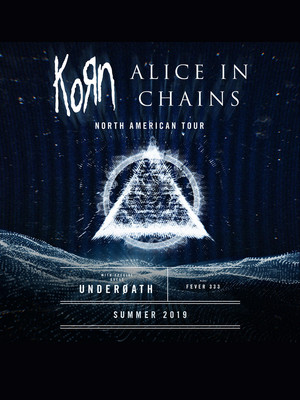 Korn and Alice in Chains

With their sixth album, Seattle grungers Alice In Chains find beauty in heaviosity to create a life-affirming statement

Why See Korn and Alice in Chains?

Forget Coachella and all other instagram-friendly festivals this Summer, because Korn and Alice In Chains are joining forces for a mammoth co-headline tour, and they'll be melting faces, inciting mosh pits and showing the social media set what it really means to rock. Both mainstays of the alternative/heavy rock scene, Korn are hard at work recording a new album slated for a late 2019 release whilst AIC will be out on the road in support of their 2018 LP, Ranier Fog, a titillating compilation of their trademark heavy riffs and rich song craft.

Formed in 1987, Alice In Chains rubbed shoulders with fellow Seattle bands Sound Garden, Nirvana and Pearl Jam as they rode the crest of the grunge wave of the 90s. Following the platinum-certified release of their debut album Facelift, they broke commercially and drew much critical acclaim with their sophomore effort Dirt. Their fuzz-laden angst paved the way for the post-grunge era of the early 2000s, when Nu Metal pioneers Korn dominated the alternative charts with classics like Freak On A Leash, Blind and Got The Life.

Cindy : “Alice in Chains and Korn”

One of the best shows you could ever see. more

Anonymous: “Alice in Chains and Korn”

absolutely a fantastic show. from beginning to end congrats to all the... more

Sound good to you? Share this page on social media and let your friends know about Korn and Alice in Chains at North Island Credit Union Amphitheatre.