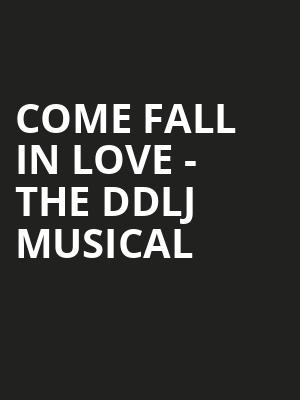 The world can always use a little more cultural understanding, and I can't wait to sit in a theater with an audience sharing the joy and surprise of Come Fall In Love - The DDLJ Musical.

Why See Come Fall in Love - The DDLJ Musical?

Bollywood meets Broadway as this exciting new musical is set to enjoy its World Premiere at the Old Globe in the 2022 season! One of Indian Cinema's most popular movies, Yash Raj Films Dilwale Dulhania Le Jayenge (or DDLJ), has been playing in theatres since its 1995 premiere.

An intoxicating romantic comedy of colliding cultures, Come Fall In Love tells the story of Indian-American Simran, a young woman, who, on the cusp of an arranged marriage, convinces her strict father to allow her one final summer of freedom in Europe. It's not long before she meets the carefree American Rog, beginning a whirlwind romance where Simran must choose between her heritage or her heart.

A collaboration between Indian and US creatives, the movie's director Aditya Chopra returns to direct the adaptation. Book and lyrics will be provided by Mean Girls' Neil Benjamin, with music from Vishal Dadlani & Shekhar. Tony and Emmy winner Rob Ashford will choreograph with associate choreographer Shruti Merchant.

Photo by Tyler Nix on Unsplash

Seen Come Fall in Love - The DDLJ Musical? Loved it? Hated it?

Sound good to you? Share this page on social media and let your friends know about Come Fall in Love - The DDLJ Musical at Old Globe Theater.