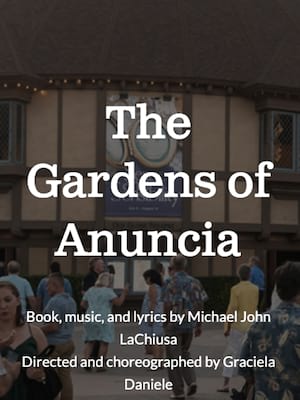 The Gardens of Anuncia

This funny, poignant, and beautiful musical features a beguilingly romantic and tango-infused score filled with the exuberant sounds of women reveling in the joys of being alive.

Why See The Gardens of Anuncia?

A Musical Directed, Choreographed and Inspired by Graciela Daniele

The Gardens of Anuncia is inspired by the fascinating life story, both on and off stage, of theater legend Graciela Daniele. It centers on Anuncia who looks back to her childhood in Argentina and honors the women in her life who made sacrifices so that she could follow her dream of becoming an artist.

The musical is directed and choreographed by Graciela Daniele whose mother became an actress years before Daniele moved to Paris and then New York where she made her Broadway debut in 'What Makes Sammy Run?' in 1964. She has been nominated for many awards including the Tony Award for Best Choreography eight times.

Seen The Gardens of Anuncia? Loved it? Hated it?

Sound good to you? Share this page on social media and let your friends know about The Gardens of Anuncia at Old Globe Theater.