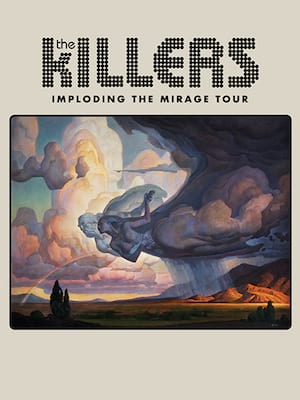 The Killers are back with their brand new album!

Why See The Killers?

The outfit behind the biggest earworm of the Noughties ("Mr Brightside" anyone?) is back on the road with their latest album, "Imploding The Mirage", coming along with them! Bursting out of Nevada with their debut album Hot Fuss in 2004, the quartet went on to sell 22 million albums internationally, becoming one of the most recognizable rock bands of the modern era.

Led by enigmatic and endlessly stylish frontman Brandon Flowers, the Killers are no strangers to arena tours, filling stadiums with their high-energy anthemic rock, which was at first influenced by the retina-burning neon and hedonism of their hometown of Las Vegas. Nowadays their genre-bending songs have taken on the heartland rock of the American road (Sam's Town) and electro-pop goodness of dance-rock (Day and Age).

Johnny Dugan: “Absolutely Stellar (a response to "so disappointed"”

First of all, have you been to a concert before? I know you said you'd... more

Being the first concert I ever attended I was blown away by the whole experience.... more

Sound good to you? Share this page on social media and let your friends know about The Killers at Pechanga Arena.