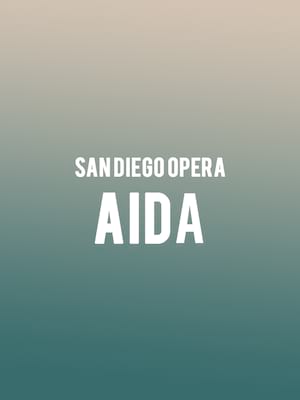 A rich, sumptuous opera revered by all as one of Verdi's greatest works

A central work of the operatic canon, Verdi's masterpiece Aida is often hailed as the pinnacle of the composer's artistic and technical expertise. Adding vivid orchestral colour, stunning exotic melodies and a theatrical atmosphere to a story about the clash of church and state, oppression of a people, patriotism, duty and the relationship between a father and his daughter, Verdi summoned a work that has captured the imaginations of opera goers for over a century and a half.

Featuring a full symphony and chorus on stage, sweeping set designs and a lauded ensemble cast of opera stars, the San Diego Opera does justice to the epic sonic tale in their 2019/20 season production of Aida. From the softly stirring notes of the prelude to the glorious Triumphal March and a climactic, heart-rending finale, Verdi's music punctuates the timeless story of betrayal, war and the love that blossoms between mortal enemies - the titular captive Ethiopian princess and a General of Egypt, Radames.

Sound good to you? Share this page on social media and let your friends know about San Diego Opera - Aida at San Diego Civic Theatre.