Sorry! You missed Of Mice and Men at Soma 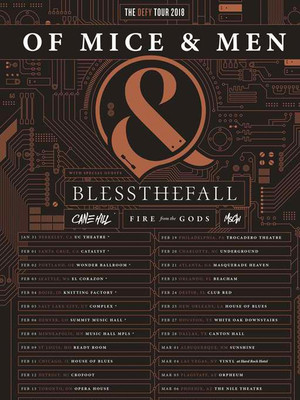 Of Mice and Men

...bursting out of the gate in flurry of raging guitars, tinnitus-inducing double kicks and unrestrained abandon, only to segue into triumphantly soaring melodic glory at the drop of a hat.

Why See Of Mice and Men?

Of Mice & Men Are Back With A Vengeance

Stadium-filling metalcore outfit of Mice & Men have spent years in the wilderness, communing with the metal powers at be to create their hot tracks. Now they're bringing their material to the stage where you can rock out with lead vocalist and bassist Aaron Pauley, guitarists Alan Ashby and Phil Manansala and drummer Valentino Arteaga.

Expect this tour to be filled with the band's trademark anthems, along with soaring riffs, flaming licks and heart-pounding, driving drums aplenty. As with their epic songs, they create sonic catharsis during their live performances, careening from an extreme tension to melodic release that results in mosh pits wherever they roam. Following former lead singer and founding member Austin Carlile in 2016, bassist Aaron Pauley stepped up to fill his shoes.

Sound good to you? Share this page on social media and let your friends know about Of Mice and Men at Soma.