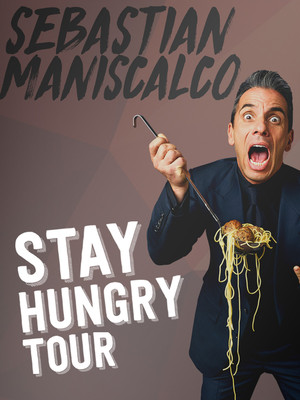 Sebastian Maniscalco has a problem with people, lucky for the rest of us, his annoyance results in some of the funniest stand-up comedy around.

Comedian extraordinaire Sebastian Maniscalco continues to bring laughter with his Stay Hungry Tour. After the release of his new book (Stay Hungry) and his seriously popular radio show "The Pete and Sebastian Show" Maniscalco brings his award-winning comedy to your town!

A speciality of Maniscalco's is saying what we are all thinking (except when he says it, it's a lot funnier). Expect outrageously funny moments and humour only adults will understand!

Overcoming a somewhat bumpy start in stand-up, Maniscalo moved to LA at the age of 24, honing his craft while waiting tables for eight years. He caught his big break when actor Vince Vaughn spotted him and asked him to join his 2005 Vince Vaughn's Wild West Comedy Show tour. Since then he has appeared on TV shows like Comedy Central Presents, The Tonight Show with Jay Leno and Comics Unleashed.

Suitable for ages 16+ due to strong language

Eric: “this dude is hilarious!”

This guy is original, and he makes you laugh from deep within. He's very... more

Anonymous: “He was amazing!!!”

Absolute comedic genius!!! It was everything i was expecting and more.... more

Sound good to you? Share this page on social media and let your friends know about Sebastian Maniscalco at Viejas Casino.